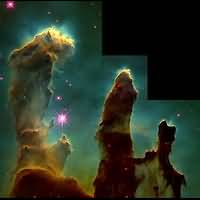 Starting on Tuesday 15th October, the first of a six week programme being shown by Gill Williams. It will feature another ‘Great Courses’ Course called ‘Experiencing Hubble – Understanding the Greatest Images in the Universe’, where a lecturer will explain the images coming back from the Hubble telescope.

The previous lecture course last year on Star gazing was well received and attended and this sounds absolutely fascinating. The Autumn and Winter lectures from this course will also be repeated. There is free entry but any donations to the Hall will be welcomed.

Our thanks to NASA for Gas Pillars in the Eagle Nebula (M16): Pillars of Creation in a Star-Forming Region